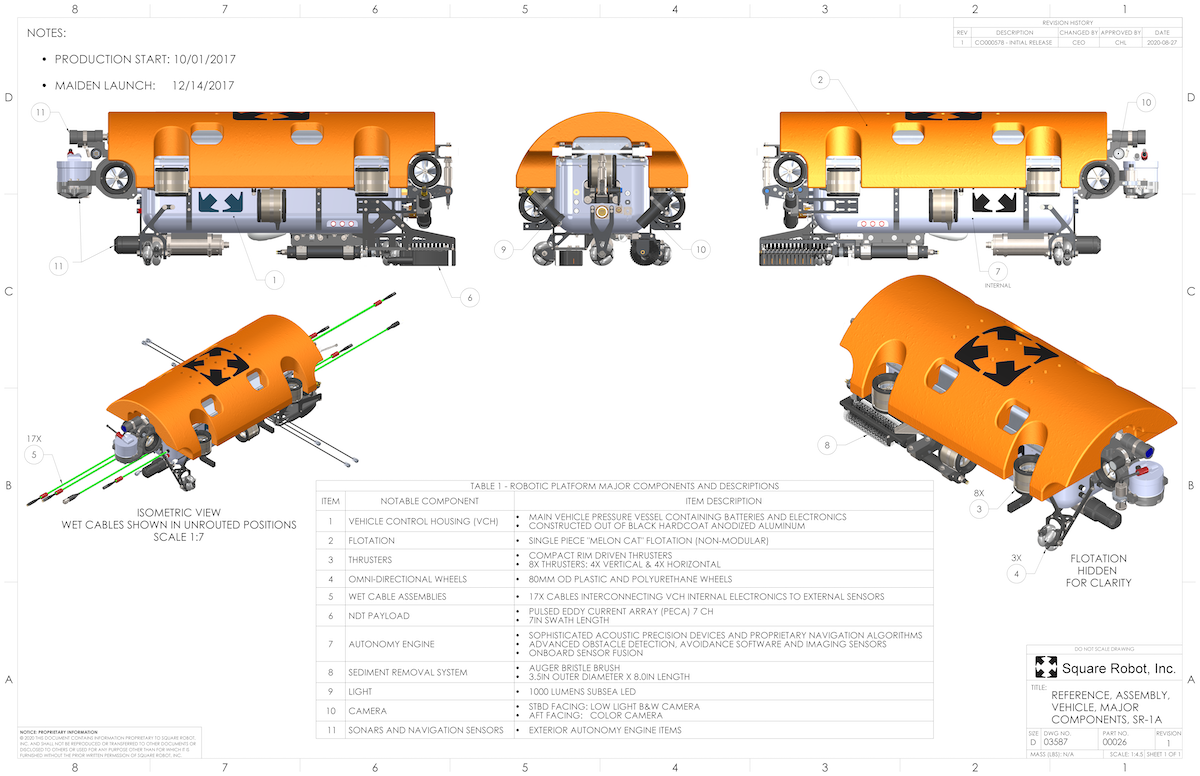 The Robot That Started It All: SR-1A

The First Iteration of Our Robotic Platform: SR-1A‍

Four years ago, Square Robot was founded with the mission to design and build an autonomous robotic platform that could be leveraged to address the complex challenges of inspecting harsh, liquid-filled environments. The company, comprised of a team of subsea autonomous robotic professionals, began production on the first version of their unique robotic platform, named SR-1 in October of 2017, and launched the robot in December of that same year. This first iteration of the robotic platform was SR-1A, which was deployed in the oil and gas industry to provide NDT inspection services of above-ground petrochemical storage tanks.

Each iteration of SR-1 shares certain components and software that define the robotic platform. But each iteration also has significant differences, making each of them uniquely adept at certain goal-oriented missions. In this article, we will focus on what defines SR-1A.‍

At the core of the SR-1 robotic platform is a collection of navigation, obstacle detection, and sensor fusion technology that provides the robot with self-driving capabilities, allowing it to execute goal-oriented missions without operator intervention. This group of devices and software is called the autonomy engine.

Each element of the autonomy engine is critical. The collection of sophisticated acoustic precision devices and proprietary navigation algorithms provides all SR-1 iterations with the ability to accurately map its surroundings in GPS-denied environments. Advanced obstacle detection software and sensors allow for superior adaptability and maneuverability in confined spaces. Finally, our onboard sensor fusion processes and interprets all of this data, creating a comprehensive understanding of the surrounding environment.‍

The main purpose of the Vehicle Control Housing (VCH) is to protect the robot's batteries and electronics from liquid environments. Additionally, the air-filled VCH adds buoyancy to the robot. SR-1A’s VCH is constructed out of black hard-coat anodized aluminum. To provide SR-1A with buoyancy, a single piece of flotation is wrapped above the VCH.‍

‍SR-1A is designed to operate in confined spaces, so maneuverability is incredibly important. When performing NDT inspections on a tank floor or annular ring, 80mm, plastic and polyurethane, omnidirectional wheels allow SR-1A to move in any direction along the x and y axis.  Additionally, a set of eight rim-driven thrusters — four oriented vertically and four oriented horizontally — allow SR-1A to hover and easily move through a wide variety of liquids with different densities and viscosities. ‍

Each of the SR-1 iterations is equipped with a unique payload. For SR-1A the payload is a Pulsed Eddy Current (PEC) Array device. Aiding the PEC device is a sediment clearing auger brush that clears away any debris to allow for more accurate data collection. This payload is well adapted to inspect the internal integrity of above-ground storage tanks, as various forms of sedimentation often accumulate on their floors.

In addition to SR-1A’s PEC payload, there are also two cameras mounted on the robot. The camera facing out from the starboard side of the robot is a low light camera used for collecting imagery at distance as well as aiding in obstacle detection. The second camera is mounted facing downward on the aft end of the robot and is paired with a separately mounted LED light to enhance visibility. This camera is primarily used for classifying defects.

That covers all of the major components that make SR-1A one of the most capable and sophisticated autonomous inspection robots designed for operating in liquid-filled environments. Next time, we will provide a comprehensive overview of the second iteration in our robotic platform, SR-1B. Stay Tuned!