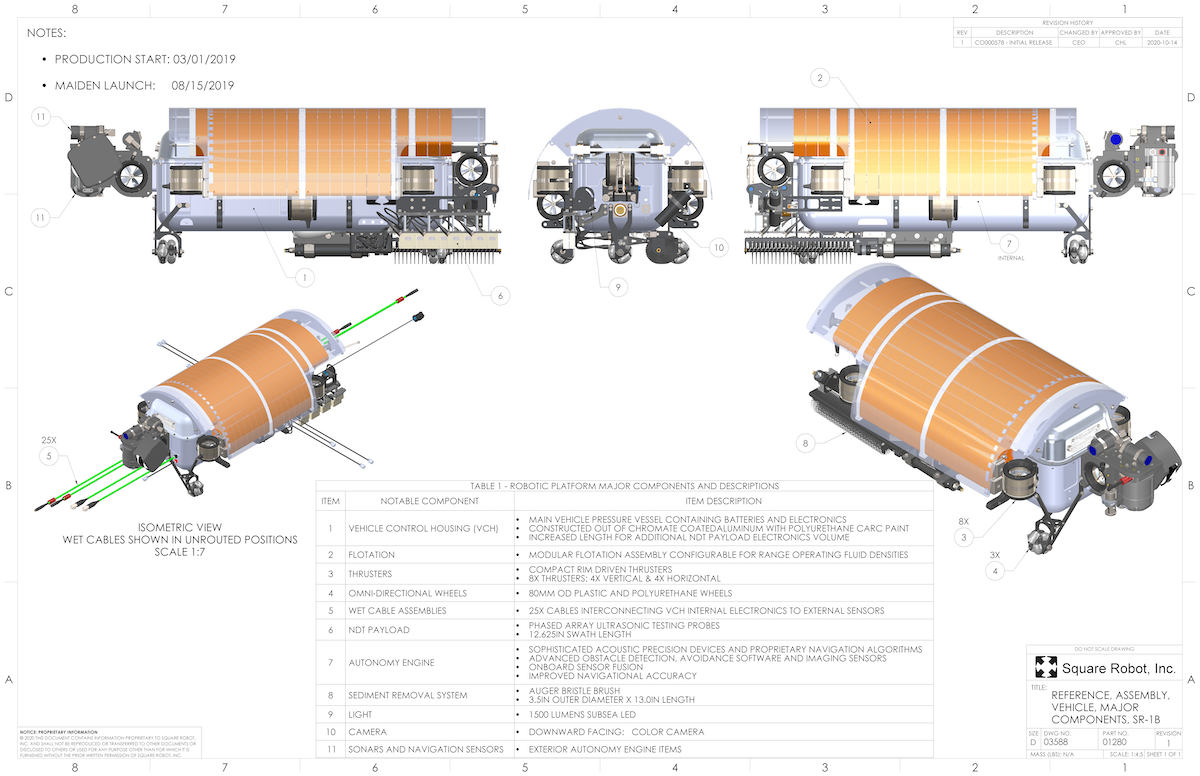 The Robot That Came Next: SR-1B

The Second Generation of Our Robotic Platform: SR-1B

In March of 2019, two years after we designed and built the first iteration of our robotic platform, SR-1A, production began on our  second robot, SR-1B. In August of the same year, construction was completed and this iteration of our robotic platform was deployed in the oil and gas industry to provide safe, efficient NDT inspection services of aboveground petrochemical storage tanks. ‍

SR-1B maintains the same collection of navigation, obstacle detection, and sensor fusion technology that provide all our robots with self-driving capabilities, allowing them to execute goal-oriented missions without operator intervention. This group of devices and software is called the autonomy engine. ‍

To provide our clients with a more comprehensive understanding of the condition of their aboveground storage tanks, SR-1B utilizes a twelve-inch Phased Array Ultrasonic Testing (PAUT) sensor to perform NDT inspections. This payload meets API 653 qualification standards and is capable of precisely measuring tank bottom thickness, including the critical zone, with greater than 90% coverage.

Accompanying the PAUT sensor is an auger brush, which clears sediment away from the tank bottom and helps ensure accurate readings.

In addition to SR-1B’s PAUT payload, a single downward-facing color camera, mounted to the aft of the robot, provides visual data. The camera is aided by a separately mounted 1500 lumen LED light rated for 500-meter depth. The valuable visual data gathered by the camera helps us and our clients better understand the internal condition of their aboveground storage tanks. ‍

In this iteration of SR-1, a few significant modifications were made to the Vehicle Control Housing (VCH). The VCH was elongated to accommodate additional internal components and to add buoyancy. The finish applied to the VCH was changed from an anodized black hard-coat to a light tan CARC paint, which is incredibly durable and corrosion resistant in petrochemical liquids as well as in most other environments. It is so durable, in fact, the military commonly uses it to paint their tanks. The paint color was changed from black to light tan to help the robot stay cool during transportation and pre-inspection before entering the tank.

Another modification made to SR-1B was replacing the single-piece floatation with modular flotation, which allows the robot’s buoyancy to accommodate a range of fluid densities and viscosities with greater ease. ‍

For this iteration of the SR-1 platform, mobility was kept consistent with its predecessor. SR-1B can travel in any direction along the x and y-axis using its 80mm, omnidirectional wheels, allowing it to perform comprehensive NDT inspections on the tank bottom and annular ring. When hovering is required, eight rim-driven thrusters — four oriented vertically and four oriented horizontally — allow SR-1B to lift off the tank bottom and deftly move through a wide variety of liquids with different densities and viscosities.

That covers all of the major components that make SR-1B one of the most capable and sophisticated autonomous inspection robots designed to provide safe, low-impact inspections of in-service aboveground storage tanks currently available. Next up in our review series is SR-1C. Stay tuned to learn what defines the third iteration of our robotic platform!